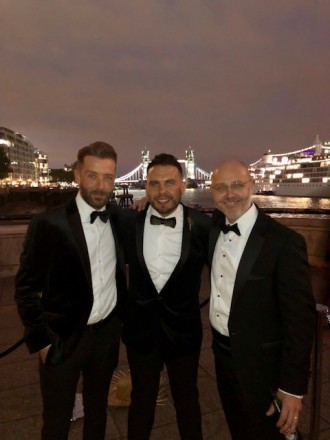 Daryl Hodgson the Senior Office Manager at Hays Lancaster has recently celebrated his 10 year anniversary at the world’s most successful specialist recruitment business.

Jeff Taylor Director of Hays Lancashire & Cumbria commented, “Daryl started his career with Hays in Preston, working in our Construction & Property specialism, recruiting firstly for property professionals then moving on spearheading our trades & labour business, taking the latter to record levels of local workers operating within the Lancashire and South Lakes market. Daryl grasped the opportunity to open a brand new office location for Hays in 2016 when we opened Lancaster, supplying Construction, Finance, Office, Human Resources and Procurement professionals in the Lancaster & South Lakes area. Daryl and his team have made a huge impact over those last three years, having assisted in progressing the careers of over 600 local professionals.

Some of Daryl most notable achievements include opening the first new Hays office since the early 2000’s, as well as being recognised as the best people manager in Hays UK&I for Q3 2016 out of over 100 offices, and notably the first person in the North West to win this award. His other achievements include his work on several projects that have championed local employment and local supply chain such as Talbot gateway and several student accommodation projects at Lancaster University which have had 100% local labour from Hays.

In his 10 years working for Hays, Daryl has personally secured over 1700 placements, supporting local people to realise their passions, furthering their careers, and in turn being recognised as a trusted careers expert in the local employment market.

Commenting on his career success so far, Daryl commented, “I am delighted to be celebrating my 10 years at Hays. I am as passionate as ever in placing local people in to local roles, and continuing to act as a career partner in the Lancaster and South Lakes area. I would like to thank all of our candidates, clients, and trusted partners in the area who continue to support us. It is a very exciting time for our area with the new link road proving successful in supporting our businesses, the exciting plans for the Eden Project in Morecambe, and the scale of development in Lancaster itself, which will no doubt create huge opportunities for the area, which is undoubtedly a fantastic area to live and work.