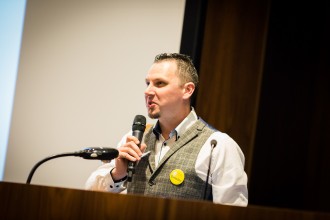 Jon Powell was recently appointed as the new President of the Lancaster and District Chamber of Commerce at the Chamber’s Annual General Meeting (AGM), replacing Mal Garnett who had presided over the presidency for the last two years. The AGM was held online via Zoom for only the second time in the organisation’s history due to the ongoing COVID pandemic.

Jon Powell, Head of Enterprise and Innovation Services at Lancaster University, and Director of Employer Solutions Ltd said during the AGM: “Firstly I would like to say a huge thank you to Mal on behalf of the Chamber team, the Exec, the Board and the membership. It’s no small task to take on the role of President. To commit a great deal of time, energy and passion to the Chamber; and who knew what was on the horizon when Mal took office in 2019? It’s been a challenging few years for the Chamber but most of all for the District and our members. Most of which are thankfully still with us, but many haven’t been able to survive the unprecedented health and economic shock of COVID-19. It’s taken a firm hand at the tiller and I’m grateful to Mal for helping lead us through these challenging few years.

“Looking forward I see potential; I see opportunity; a rising tide for the district.”

Vicky Lofthouse, Chief Executive Officer of the Chamber, also added: “It is great to see the Chamber’s board strengthened with a more diverse business base and the appointment of Jon as President. I’d also like to thank outgoing President Mal Garnett for his two years of great service as President, and his continuing support as a Member of the Chamber.

The Non-Executive Board of Directors whose task is to strategically lead the direction of the Chamber, was streghtened further by the appointment of Christopher Gardner as Vice-President.  Chris is a Director of Waters & Atkinson Chartered Accountants based in Morecambe and is looking forward to working with Jon as part of the senior leadership team over the next two years.

Alastair Richards, Chief Executive of North West Cancer Research, was appointed a Non-Executive Director at the AGM and looks forward to utilising his vast experience in the not-for-profit sector in his new role.

The celebratory part of the AGM has been put on hold till members can come together in person.

Jon explained that: “The exchange of the chain of office, the well-earned thank you gifts and the beers at the bar will have to wait until August. I hope you can all join me on August 25th for the Chamber BBQ.  As we look forward to meeting in person and running our events, our workshops and networking once again.”

To learn more about the Chamber Board of Directors please visit https://lancaster-chamber.org.uk/board-of-non-executive-directors

A copy of the AGM meeting minutes can be found HERE