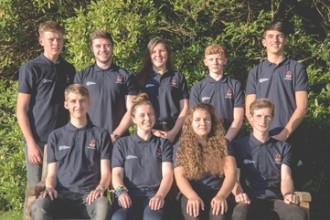 Heysham power stations’ latest recruits have joined the company to start their apprenticeship in the nuclear industry.

The group started their careers with EDF Energy with a team-building week in the Lake District where they met other apprentices from power stations across the UK. The apprentices took part in a series of challenges which culminated in climbing Helvellyn.
John Munro, station director at Heysham 2, said: “It was a pleasure to meet these young people and their families when we held an open evening for them at the station in the summer.
“It is a fantastic time to be joining the nuclear industry, and they will have a very bright future with us here at Heysham. I wish them well as they start their new engineering careers.”
With the outward bound course complete, the apprentices are now studying at HMS Sultan in Portsmouth where they will spend the next two years. The apprentices will learn basic engineering skills in their first year, before specialising into their trade in the second year.

During the autumn, members of the stations’ teams lead by apprentice co-ordinator Kevin Demain will be visiting schools and colleges to promote the scheme. In December the stations’ Visitor Centre will also be holding two apprentice open days.