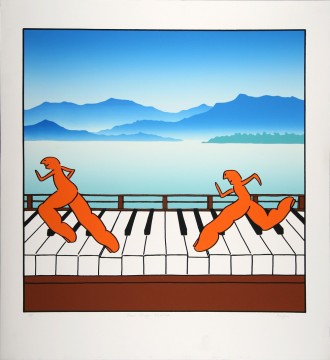 Two of Lancaster’s most popular music festivals have inspired a wide range of artists to create work for the latest exhibition at King Street Studios.

The Art of Music opens on September 13 to coincide with Lancaster Jazz Festival and runs until October 19 to take in Lancaster Music Festival.

King Street Studios made an open call to local artists for exhibition submissions celebrating the power of music to influence our lives.

The result is a medley of paintings, etchings and print works, drawings, sculpture, mixed media, photography and decorated ceramics demonstrating an eclectic mix of creative approaches.

Also featured are an original drawing by Roger Dean who designed album covers for Yes and posters by Lancaster’s John Angus who designed many of the posters for the rock and pop concerts at Lancaster University during the 1970s and 1980s.

Reminders of the bands which played at the University will be displayed on the walls of the Thomas Storey Gallery at The Storey during a supporting exhibition of archive photography running from October 2-15.

Barry Lucas, author of When Rock Went To College, will introduce the photographic exhibition at an opening event on October 4.

“Who has not felt the touch of music in their lives in some way?” said Roy Smith of King Street Studios. “ Whether it is the infectious energy, passion and commitment of musicians at a live performance, or the contemplative nature of listening, or maybe the call to movement of dancers responding to live music.”

The Art of Music was curated by King Street Studios together with Stuart Marshall of Lancaster Music Festival which returns for its 10th anniversary this year, promising more than 400 performances across the city from October 10-14.

The Art of Music opens at King Street Studios with a preview on September 13 from 6-8.30pm and runs on Fridays and Saturdays from 11am-5.30pm until October 19 or by appointment by ringing 07743238663. For more information, visit www.kingstreetstudios.art