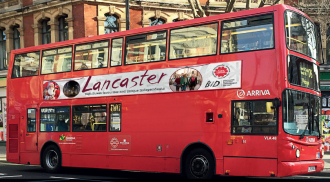 Lancaster BID was successfully entered into the Healthy High Street programme in 2016, the final year of the programme. From this Lancaster BID have worked closely with key partners from Boots, M&S, Greggs, EE, Lancaster City Council, Wilkos and Lancaster University, as well as both shopping centres. The Healthy High Streets team meet monthly to discuss initiatives they can be involved with in the city centre, with their most recent focus on an up-coming Student Night as well as looking at crime in the city.

BID Development Manager, Tom Fyson, said 'We are delighted with this success which will give us an exciting opportunity to promote the city. Bus advertising is seen by thousands of people as the buses drive hundreds of miles throughout the district daily.'

The bus advertising will be used as part of the Healthy High Street student campaign as well as complimenting the BIDs Christmas campaign.

BID Manager Rachael Wilkinson said: "We are thrilled with our successful application to win a share of £50,000 worth of bus advertising. We trialled a bus advertising campaign last year, which complemented our winter campaign, and was widely received. Being able to do this again in 2017 on a much bigger scale ensures that we are continuing to obtain significant additional resources, which helps us to continue to benefit the businesses who operate here".

Lancaster BID have also recently won £1,000 worth of free Christmas lights from Blachere Illuminations to add to the annual display.