Big Names On The Big Screen a The Dukes 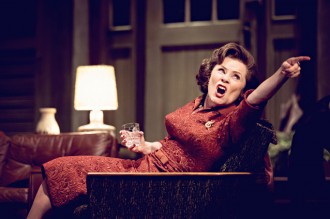 A Q&A with Stephen Fry, a film about Whitney Houston, West End shows and major art exhibitions will all hit the big screen at Lancaster’s Dukes cinema this summer.

The Hippopotamus(15) is the first screen adaptation of Stephen Fry’s work as a novelist and stars Roger Allam as a whiskey-swilling poet.

The film, showing on May 28, will be followed by a satellite broadcast Q&A with Stephen Fry.

There’s another satellite Q&A on June 11, this time with Nick Broomfield, the director of a new film about one of the greatest singers of all time – Whitney Houston – which will be screened beforehand.

Tickets for both Hippopotamus and Whitney: Can I Be Me(15) are each priced £8/£7.

The Dukes Stage on Screen series continues to give local theatregoers the chance to experience some of the best theatre productions currently wowing London audiences.

There’s two chances to see Imelda Staunton in the new production of Who’s Afraid of Virginia Woolf on May 27 and June 3 and there’s another opportunity to watch Daniel Radcliffe in the 50th anniversary production of Rosencrantz & Guildenstern Are Dead on June 15.

Two major art exhibitions can also be viewed on the big screen at The Dukes in June and July.

Michelangelo – Love and Death on July 23 offers a full and fresh biography of Michelangelo who, along with Leonardo Da Vinci, is considered one of the greatest Renaissance artists.

Exhibition on Screen tickets are £8/£7 concessions.

For more information on any of these screenings and to book, call The Dukes Box Office on 01524 598500 or visit www.dukes-lancaster.org