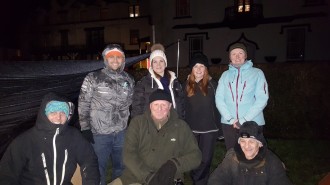 Lancaster-based Baines Wilson LLP braved a night in the cold to raise over £1000 for Cumbria Community Foundation’s Winter Warmth Appeal.

The Baines Wilson team won two free places for The Big Sleep and offered the opportunity to another local business to take up the challenge with them. Baines Wilson were joined by Conlon Construction, a firm from Preston who are currently working on the refurbishment of the Low Wood Bay Hotel on the shore of Lake Windermere where The Big Sleep took place. As well as taking up the challenge Conlon Construction generously donated £200 to the Winter Warmth Appeal to help raise money for the cause.

The team managed to raise £1000 for the Winter Warmth Appeal in February 2016 as part of the firm’s ongoing commitment to provide support to local charities and community projects and is delighted to reach the same target this year. Joanne Holborn, Head of Employment Law and Training said: “We really enjoy working together to raise money for local charities and there was great camaraderie at the Big Sleep despite the rain.”

To donate to the Winter Warmth Appeal visit www.justgiving.com/fundraising/Baines-Wilson-LLP3