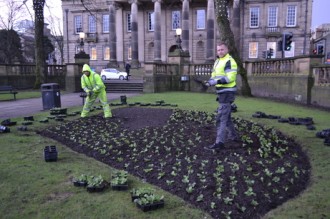 Lancaster BID has once again teamed up with Lancaster City Council to sponsor the spring bedding planting in Dalton Square.

The planting has already helped to add some colour and enhance the vibrancy of the city centre for visitors and locals alike.

Lancaster BID is also working with Lancaster City Council to develop longer term plans to add more colour and planting schemes throughout the city centre over the next two years. Whilst the plans are still being finalised it is anticipated that some of the initial work will be unveiled later this spring.

Rachael Wilkinson, Lancaster BID Manager, said “Lancaster BID recognises the important role an attractive city centre has in promoting a thriving and vibrant place to visit and do business.”

Planting schemes are not the only contribution Lancaster BID makes to a ensure Lancaster becomes a more attractive place. Our ongoing partnership with Lancaster City Council ensures additional cleaning staff are deployed in the city centre to keep litter levels low and tackle regular grot spots.

The last year has seen a significant improvement in the cleanliness of the numerous ginnels as well as rapid action to tackle graffiti and fly tipping. Chewing gum removal has also been a priority with BID commissioning the removal of gum from 5,000 square metres of paving in 2018 and ensuring the standard is kept high with follow up from the City Council.

After securing a ‘Special Mention’ from the judges of the Great British High Street Awards in 2018, it is hoped that the city will see even more success in 2019 as further improvements are delivered. Future submissions to Britain in Bloom are also planned.

City centre businesses with suggestions for locations which could be considered for future planting schemes are encouraged to get in touch either by email to info@lancasterbid.org or phone 01524 590650. You can also contact us to highlight any frequent grot spots which need addressing.

All planting work is being implemented by Lancaster City Council who also continue to provide summer bedding throughout the city centre.