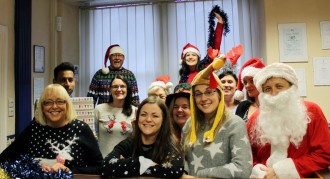 A ‘crackers’ social media campaign is being led by a Lancaster insurance Brokers as a thank-you to CancerCare during the festive season.

Nicola McIlwrath, a commercial insurance advisor with Reid Hamilton in Lancaster, said she wanted to help organise the company’s Christmas campaign in recognition of her family’s experiences of cancer.

She said: “This festive season we want everyone to get involved in supporting CancerCare.

“We’re asking you to take a Christmassy picture, tell a joke, sing a song – get creative!

“Most importantly, we want you to share your creation with your friends on social media, challenge them to do the same and text ‘CCAR31 £5’ to 70070.

“It couldn’t be simpler - cancer doesn’t take a break for Christmas and should you be able to help, your support would be gratefully appreciated.”

Nicola explained that her uncle developed an astrocytoma (a type of brain cancer) shortly before the birth of his daughter 17 years ago.

She said: “After about 10 years my uncle was finally seen by a surgeon who would operate and we enjoyed a few years of relative relief.

“The tumour grew once more and my family have been forced to get to grips with the thought of a beloved husband, father, brother, uncle and friend not being with us for as long as we would wish.

“The reason I am mentioning my uncle is to highlight the benefits of a charity like CancerCare.

“Yes, we need more money to research this disease in the hope that one day we have a cure, but what about now?

“What about the people suffering now and facing an uncertain future? What about their children who don’t know how to process the complex emotions behind the potential loss of a parent, or worse, facing their own mortality?

“The service given by CancerCare in supporting everyone affected by cancer, not only the patient themselves, but their family and friends, is completely invaluable. The support given, both mentally and physically, has made and continues to make, a huge difference in the lives of many.

“Most of us have our own stories to tell of our personal struggles or the struggles of those we love thanks to this illness and we can all come together in supporting those experiencing it now.

“My colleagues and I are extremely proud to have the opportunity to raise funds for such a worthy cause and I truly hope we can make this a real success!”

Neil Townsend, Chief Executive of CancerCare, said: “We are delighted that Reid Hamilton have chosen to support us with their ‘CancerCare #Xmaselfie’ campaign.

“This year we will be open over Christmas so people who need our support can continue to see our therapists.

“Christmas can be one of the hardest times of year for people who are faced with an illness like cancer. It can also be lonely so anyone who needs us is welcome to pop in for a brew.

“We’re looking forward to seeing people getting into the spirit of the Reid Hamilton campaign and taking lots of selfies!”