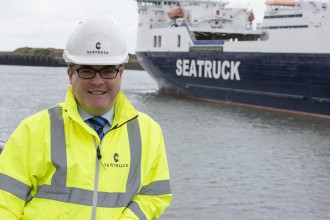 Freight ferry company Seatruck is reporting growth of more than 18pc in 2016 consolidating its position as the fastest growing operator on the Irish Sea, as more hauliers switch to its services.

Seatruck chief executive Alistair Eagles said freight levels are also up 30pc in November 2016 compared to November last year. He further forecast winning even more business from hauliers switching ferry operators, following the opening of the new £125 million Bay Gateway relief road on October 31. The road by-passes the previous bottle neck of Lancaster, slashing journey time from the M6 to the Port of Heysham, where Seatruck is headquartered.

“The new Bay Gateway relief road is a game changer,” he said. “It sends a massive message to the transport industry that the Port of Heysham is now a hugely more competitive alternative to more remote ports like Holyhead and Cairnryan. Hauliers no longer have to wrestle with congestion around Lancaster and the Heysham peninsula. It is our firm belief that Seatruck will see more and more hauliers switching to take advantage of our freight only, driver free trailer model. We are seeing a real demand for this and believe that this is the future of Irish Sea freight – freeing up drivers and their time. We have listened to hauliers and the problems they are facing with a chronic shortage of HGV drivers. It makes increasing sense for hauliers to ship trailer only. Our operation offers hauliers the option of drivers dropping off their truck and then instead of being stuck on the ferry, going on to another job.”

Mr Eagles said Seatruck’s Irish Sea tonnage growth this year is around three times the market level. The new growth figures are the latest chapter in Seatruck’s success story. In the past decade Seatruck has grown its market share by more than 350 per cent. In October, in response to the opening of Bay Gateway, Seatruck added a larger vessel to its Heysham- Dublin route almost doubling capacity. The 105 units Clipper Point joined her two sister vessels Clipper Pennant and Seatruck Panorama which already operate between Heysham and Warrenpoint in Northern Ireland. At the same time Seatruck added a fourth vessel to its busy Liverpool – Dublin service.

Mr Eagles made a direct appeal to hauliers transiting through Scotland to think again about how they access Northern Ireland.

"A large percentage of haulage traffic transiting to Northern Island drives past the Bay Gateway on its way to Scotland on a journey from the North of England and the Midlands that can take more than three hours from Heysham alone,” he said. "It really is much easier to use the Bay Gateway which takes you straight into Heysham, slashing fuel costs and mileage, saving on truck wear and tear as well as reducing the vehicle’s carbon footprint. We believe this message will increasingly resonate with hauliers and their customers at a time when they are being urged to be as efficient, cost-effective and eco-friendly as possible.”

The owner of Heysham Port, Peel Ports has also recently announced a further £10m investment in the facilities at Heysham including a new loading ramp which will be installed in 2017. This will further strengthen Heysham’s position as a leading hub for Irish Sea freight. Further improvements in IT systems will make the process of delivering and collecting units from Heysham Port much easier for HGV drivers.

The company’s modern fleet of roll-on roll-off ferries operates 38 sailings per week between Liverpool and Dublin as well as a weekly service between Dublin and Bristol.