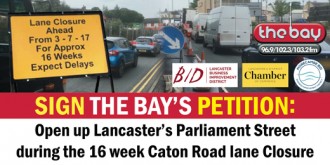 More than 1,700 motorists signed the petition by Chamber of Commerce Ambassador member, The Bay Radio, over the last three days, leading the council's highways team to fully reopen Caton Road.

The authority has also announced a public consultation on how best to handle future lane closures, which will also look at helping nearby student accommodation project progress while causing minimal disruption.

The Bay's campaign was supported by the Lancaster Chamber of Commerce and the Chamber members, Lancaster and Morecambe Business Improvement Districts.

He said: "Quite clearly things that should have been done hadn't been done. The council has listened and is pleased to announce that the roadworks will be taken away this afternoon.

"The whole routing situation will be reviewed in consultation with the local community. All that's down to the campaign being run by The Bay, because without you raising it, none of us would have got to know [about the problems] until much further down the line."

Mr Phillis was joined by Morecambe councillor Margaret Pattison, who added: "People in this local area are absolutely fed up of sitting in traffic, so I saw The Bay's campaign and thought 'we need to support this' so I got in touch with the county councillors and local councillors and they've all supported us."

The Bay's campaign was also supported by both of North Lancashire's MPs.