Lancaster & District Chamber chooses their Charity Of The Year, 2019/2020 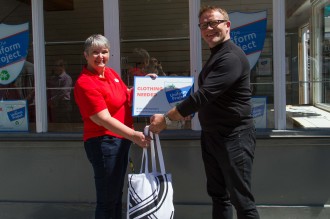 Each year Lancaster and District Chamber of Commerce chooses a charity to support as their Charity Of The Year. This year the chosen charity is the Morecambe Bay Foodbank.

Morecambe Bay Foodbank provides three days’ nutritionally balanced emergency food and support to local people who are referred to them in crisis. They are part of a nationwide network of foodbanks, supported by The Trussell Trust, working to combat poverty and hunger across the UK.

Annette Smith, Manager of the Morecambe Foodbank, said: “We were delighted to learn that we had been chosen by the Chambers new President Mal Garnett to be the Chosen charity of the year.

“In these times when families and individuals are finding it extremely difficult to keep food on the table, all charities are also challenged spending valuable time trying to ensure the financial stability to meet its overheads of Rent, vehicles, fuel, and administration costs.

“This growth of our ongoing partnership and support from The Lancaster and District Chamber of commerce will allow us to develop and do so much more in our community so that together we can ensure, to the best of ability, nobody should go hungry.

“Your support will help us to help others. We look forward to meeting more Chamber members, and there is an open invitation if anybody would like to come and visit us to learn more about the work we do.”

In 2018, the Foodbank distributed over 7000 parcels, and so far this year are seeing a steady 10% increase. It takes over 80 volunteers, 60 tonnes of food to achieve. To help families with the crippling cost of school uniforms, they have started the Uniform Project in the hope that families should not have to choose between school uniform or buying food.

Mal Garnett, President of the Lancaster and District Chamber of Commerce added: “It’s confession time - I was always aware of the Morecambe Bay Food Bank but I only really sat up and took notice when I saw an article in the New York Times talking about children in Morecambe searching through ‘trash cans’ to find something to eat. I too am guilty of putting my head in the sand and like so many people have salved my conscience by donating a few bags of food at Christmas thinking that is enough – but it isn’t. I’m sure we all agree that there shouldn’t be any need for a food bank in 21st century Britain, but as it stands there is, and we can’t ignore the plight on our doorstep. We have to help.  So, as President, I have chosen the Morecambe Bay Food Bank to be our charity of the year because it directly benefits local people.

“I’m humbled whenever I talk to Manager of the Food Bank, Annette and her army of volunteers. Because so many of the people behind the Food Bank give their time and skills freely voluntarily, it is one of those rare charities where almost every penny raised directly benefits the end-user at a grassroots level. As a team, they do everything they can to help their clients get back on their feet and retain their dignity at the same time.

“Having grown up as the youngest of 7 in Tyneside in the 70s and 80s when the mines were closing, I know only too well what it’s like for a family to live through hard times. I remember my parents’ desperate struggle to feed and clothe us, and it gives me a personal connection to the people of the Food Bank. The fact is that almost all of us are only ever three months away from relative poverty and Food Bank clients are often just people who are trying to do their best for their families after hitting a bump in the road. So, let’s do what we can to support our community by helping this incredible organisation to keep doing its work in the hope that one day it will no be longer needed.”