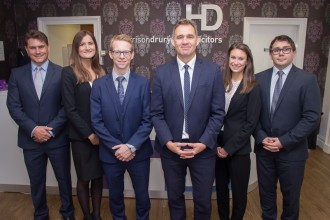 A Lancaster law firm has recruited four trainee solicitors as part of its annual intake of new legal talent.

Harrison Drury has significantly expanded its trainee programme in recent years alongside impressive growth for the firm, which also has offices in Preston, Clitheroe, Garstang and Kendal. The latest recruits mean Harrison Drury has now offered a total of 11 trainee contracts in the last two years.

John Chesworth, managing director at Harrison Drury, said: “I’ve been impressed once again with the quality of applicants we’ve had for our training programme, which gets stronger each year. The competition for these places has been fierce and it proves to me that we are capable of keeping the brightest legal minds in the region.

“It’s great to welcome Gill, Emily, Robert and Matthew as our ‘Class of 16’ intake. They represent the future of the firm and I’m looking forward to seeing them grow and develop their legal careers with us.”

Emily joins Harrison Drury after 12-months working within the real estate team of a law firm in Cheshire. The University of Newcastle graduate will initially work with the employment law team at Harrison Drury.

Gill Ashcroft, who gained a distinction in both her Graduate Diploma in Law (GDL) and Legal Practice Course (LPC) at the University of Law, Manchester, will work with the divorce and family law department.