Godot Is Well Worth The Wait 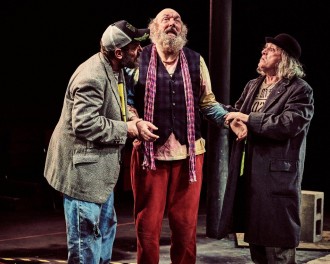 Samuel Beckett’s iconic play – Waiting For Godot – will be staged at The Dukes in November.

The play, which is said to have changed the rules of theatre, may be 65-years-old but this new production in The Round shows it is as fresh and darkly comic as ever.

Produced by the acclaimed Tobacco Factory Theatre, Waiting For Godot tours to Lancaster from November 7-11 straight after its premiere in Bristol.

First performed in 1953, Waiting For Godot is an undeniable classic of 20th century literature about the struggle for purpose, the power of friendship and the hunt for a pair of decent boots.

It centres on a tetchy friendship between two vagrants, played by Colin Connor and David Fielder, stuck in some kind of Groundhog Day loop where they meet in the same place day after day in the hope of getting something from a landowner called Mr Godot.

Waiting For Godot is recommended for anyone aged 12 plus. Tickets are priced £15.50-£19.50, concessions £2 off. There’s a post show talk-back free to ticketholders on November 7. For more information and to book, ring The Dukes box office on 01524 598500 or visit www.dukes-lancaster.org