Good Times To Be Had At Hard Times 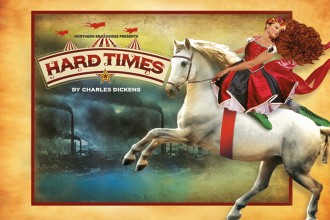 A witty new adaptation of Charles Dickens’ great Northern novel Hard Times is coming to Lancaster, just a few miles from the city which inspired it.

Northern Broadsides make a welcome return to The Dukes from February 27-March 3 with their latest production.

Coketown, the focus of Hard Times, was based partly on Preston and is a world where imagination is forbidden.

Thomas Gradgrind will not permit fanciful thoughts in his school or his home but what effect will this policy have on his own children? How can he protect them from corrupting influences – especially when the circus comes to town?

Dark satanic mills, interrupted by the colour and vibrancy of Sleary’s Circus, set the stage for a sweeping tale of supressed love and seduction, peopled with the sharply observed exaggerated characters for which Dickens is celebrated.

Among the cast of Hard Times is Victoria Brazier who appeared as Captain Molly in The Dukes outdoor production of Treasure Island last year. She was also in the cast of Oliver Twist in Williamson Park and the 2015 Christmas production of Beauty and The Beast.

Director Conrad Nelson said: “In this witty and imaginative adaptation, we maintain all the humour and pathos of the original novel, presented with a lightness of touch.”

Hard Times has been adapted by Deborah McAndrew’s whose past plays include An August Bank Holiday Lark which won the 2014 UK Theatre Award for Best New Play. Her other work which has previously toured to The Dukes are last year’s Cyrano and A Government Inspector in 2012.

Tickets for Hard Times are priced £15.50-£19.50 with a £2 discount for concessions. There’s a free after show talkback on February 27 for ticketholders.

For more information and to book, ring The Dukes box office on 01524 598500 or visit www.dukes-lancaster.org