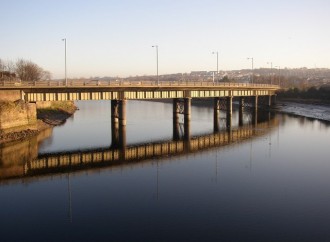 Lancaster and District Chamber of Commerce, and both the local Business Improvement Districts, Lancaster and Morecambe, welcome the positive news that the proposed closure of Greyhound Bridge will not take place until after the Christmas period.

Although the bridge was originally proposed for closure from September 2016 for up to five months, these plans were put on hold due to General Election and funding uncertainties. At the time all parties involved were concerned about the impact on the traffic in the District, especially after experiencing recent upheavals to the road system including the United Utilities works in Lancaster, the 2015 flooding by Storm Desmond and the building of the new link road. Further disruption to traffic over such a crucial time could have had commercial ramifications to many businesses.

As a result of the original timings John O’Neill, from Lancaster Chamber and Morecambe BID, and Rachael Wilkinson, Lancaster BID, arranged a meeting with the County Council engineers to express their concerns and to ensure that all traffic disruption was mitigated as much as possible. Having been presented with the proposed diversion plans they were somewhat assured that traffic disruption would be kept to a minimum over a crucial period but the election delayed the proposed timings.

Lancaster BID Manager Rachael Wilkinson said: “When John and I went to meet David Griffiths from Lancashire County Council I expressed my concerns with the original timing of the Greyhound bridge work, which was due to take place over the Christmas period. The deferral of the bridge closure, although it may cause slight disruptions, is now taking place at a much better time of year for Lancaster businesses. The work taking place next year should also ensure better weather, which may ensure the work is carried out in a timely manner, as a lot of the steel, concrete and painting work is weather reliant.”

John O’Neill added: “Whilst the work that needs to be carried out is essential and ensures that the life of the bridge is extended for much longer than its original intended lifespan, it is good to see that the schedule of works is now intended for a quieter period between Christmas and summer”