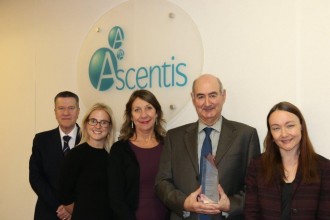 Ascentis have been announced as the Awarding Organisation of the Year, for their services to Education, at the FAB (Federation of Awarding Bodies) 2017 Awards in Leicester on Thursday 19th October 2017.

The Charity, based on the Lancaster Business Park, was recognised as the best awarding organisation in the country as the judges felt that Ascentis has demonstrated an exceptional contribution to the awarding industry and education. In the academic year 2016-2017 Ascentis helped a total of 139,916 people through their charitable work – either through qualifications or their IDL dyslexia software.

Phil Wilkinson, Chief Executive Officer of Ascentis, said: “I am delighted that Ascentis has been named as the Awarding Organisation of the Year by the Federation of Awarding Bodies. This prestigious Award recognises that Ascentis has demonstrated an exceptional approach in the way it conducts its work and has made a major contribution to the development of the awarding industry and the world of education and skills.

This year, the competition was at an all-time high with over 170 awarding organisations in the Education sector. The Award for Organisation of the Year was judged by three external industry experts. These were: Dr Neil Bentley, CEO of Worldskills UK; Paul Warner, Director of Research and Development at the Association of Employment and Learning Providers (AELP); and Julia Wright, National Director at Campaign for Learning.

Phil Wilkinson, concludes: “It is a very exciting time for our Company as we continue to grow throughout the UK and overseas with our portfolio of qualifications and specialist dyslexia software. This Award is for our skilled and committed staff who continually strive to provide the optimal standard of service to our customers.”