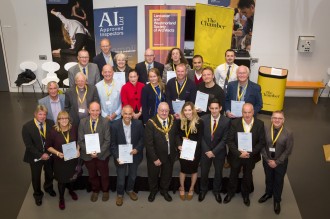 Inaugurated in 1986 as a part of a national initiative called Time for Design, the Lancaster District Design Award scheme has run for 30 years.  In that period it has recognised nearly 200 schemes and projects in the District, ranging from major new build and restoration projects to landscaping work and small improvements.

The chief criterion for the awards is design quality in the built environment.  The awards give recognition to schemes, both public and private, whose external design and appearance add to the attractiveness of the Lancaster District. Not only are the winners recognised, but there are also commendation awards.

Over the years the scheme has recognised a varied list of buildings, including some quite small ones.  We have tried to make sure that it doesn't just reward big or expensive schemes.  A special feature is that the awards and commendations go to the owners and the  builders of the schemes as well as the architects  -  it is not just an architects' scheme, like the Stirling Prize and similar things.

Builder: A B Services Northern Ltd