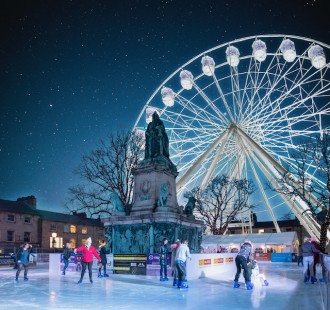 The city of Lancaster can expect to see visitor numbers increase once again this December as Lancaster On Ice announced its return to Dalton Square in 2019.

Fresh off the back of its success in 2018 the event, which welcomed more than 35,000 skaters, will light up the city centre once again, although this time it will be accompanied by a big wheel. The event’s organisers Martin Horner, Hannah Horner, Dan Knowles and Chris Selkirk have secured Europe’s largest portable observation wheel to add to the centrepiece rink.

“We had to go bigger and better this year,” Martin Horner announced. He and Hannah Horner are owners of The Borough in Dalton Square which funded the original event. “At the start of this year we took a few weeks to reflect on last years event. There are some structural changes to make but most importantly the event has to have the WOW factor.”

A planning application will be submitted this year to fully pedestrianize Dalton Square allowing for a larger rink, market stalls, a tipi bar and of course the wheel. “Last year was about people visiting Lancaster for a couple of hours, this year we want to work with the city to make it a day out,” Dan Knowles added.

This years’ event is expected to attract 50,000 skaters with at least 20,000 more coming to visit the observation wheel and festive markets. The organisers plan to work closely with Lancaster BID and the city council to ensure visitors to the city also venture on to other attractions.

The successes of last year’s event included over £6000 raised for St John’s Hospice, as well as free skating sessions for the charities Unique Kidz and Co and Morecambe Bay Foodbank. “Charity will remain a focal point; this is certainly a city-wide event,” said Hannah Horner.

The event is due to launch on the 23rd of November 2019 and run for six weeks until the 5th of January 2020. Anyone wishing to know more about the event should follow facebook.com/lancasteronice or email info@lancasteronice.co.uk