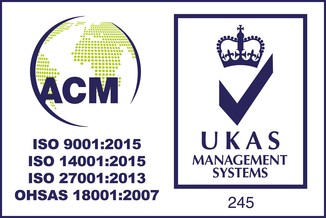 The extensive audit, which took place in April, was carried out by ACM Limited, an internationally focussed certification business which services thousands of clients in more than twenty countries around the world. The objective of the audit was to confirm that the management system had been established and implemented in accordance with the requirements of the audit standard and applicable legislation. Following the process, the audit team concluded that LARS had completely established its management system in line with the requirements of the standard.

ISO 27001 certification is one of the most widely recognised and internationally accepted information security standards. To achieve it, LARS was required to satisfy the auditors from ACM Limited that its business is not just systematic, but also rigorous in its approach to managing all sensitive company and customer information. It was also required to demonstrate that good processes are in place to help avoid mistakes that may lead to security issues.

“ISO 27001 is one of the most respected and widely recognised security standards worldwide. Achieving ISO 27001 certification is a huge boost to the whole company and reinforces our commitment to providing our customers and other stakeholders with the highest level of information security management,” said Julian Cooper, Business Development Manager at LARS.

ISO 27001 helps organisations keep all their information assets secure, such as financial information, intellectual property and employee details. By implementing a framework of policies and procedures, organisations are able to minimise the risk of a security breach, leading to increased business confidence and resilience.

Adds Ian Turner, Managing Director at LARS; “I would like to thank everyone at LARS for their hard work in making this possible. By putting in place and following the necessary steps to comply with ISO 27001, we can offer assurances to clients and suppliers that we have a robust information management security system in place, a system which applies not just to our IT, but to every aspect of our business.”

In conjunction with the ISO 27001 audit, other accreditations previously awarded to LARS were also reassessed. These included ISO 9001, ISO 14001 and OHSAS 18001, and no non-conformities were recorded.