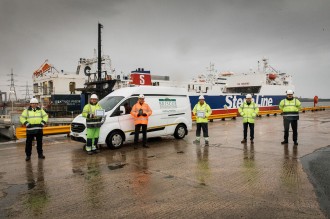 A Carnforth-based civil engineering and building company is celebrating after winning a prestigious industry award and being highly commended in a second.

Colin Briscoe Construction (CBC) won the best project in the North West award in the £1m to £5m value category for work carried out for Peel Ports to ensure Port of Heysham was ‘Brexit ready’ and freight using the facility did not suffer any delays arising as the new regulations came into force.

This established and well-respected company was also highly commended in the collaborative partnership category for its work with Peel Ports on the same £1.4m project.

The awards were made by the Civil Engineering Contractors Association (CECA), who represent companies who deliver, upgrade and maintain the country’s infrastructure.

“We are delighted to have won these awards,” said Colin Briscoe, CBC Managing Director. “It is a fitting recognition for the team, who have spent many years developing what we consider is a professional civil engineering and building company.”

Since CBC began trading more than 25 years ago, they have successfully completed numerous technically demanding civil engineering and building projects, as well as providing a facilities management and minor works service for their clients.

When Peel Ports needed to make urgent changes at Port of Heysham in the run-up to Brexit in 2019, it turned to CBC.

Work began in late August 2019 and was completed in time for the original Brexit deadline of 31st October 2019.

“The challenge was to do all this work while the port remained fully operational - a challenge we fully met,” said David Evans, CBC Business Support Services Director.

Mark Patterson, Peel Ports Project Manager, praised CBC for its work on the project. “There are differences in the construction industry from talking about collaboration to doing it and being able to quantify and articulate the benefits. By collaborating with Colin Briscoe Construction in this project the benefits were articulated and demonstrated by having the works completed on time and to budget, even with a challenging mobilisation period for both parties.”

Colin Briscoe said: “Our focus has always been to provide a best value, professional and personal service for all our clients. We have built the business on reputation and grown steadily through word of mouth recommendations.”

During the pandemic CBC worked hard and adapted quickly and by working collaboratively with their clients were able to maintain, wherever possible, their projects delivery and facilities management service throughout the various lockdowns in a fully Covid compliant way.

The company, which currently directly employs 27 staff, is committed to continued controlled growth and is always looking to recruit the right people to join the team. Potential managerial and operational staff should contact David Evans by email on info@briscoeconstruction.co.uk or telephone 01524 730764.

Pictured at Port of Heysham with the awards won by CBC are (from left): Steve Honeybone, Peel Ports’ Projects Manager, and Anthony Butts, CBC Construction Director