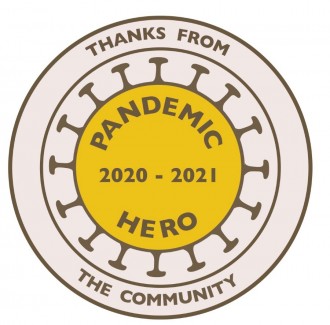 LANCASTER’S FULL COMMUNITY TO THANK THE PEOPLE THAT PUT THEIR LIVES ON THE LINE DURING THE PANDEMIC: How you can sponsor this as businesses

We all remember that many local people took a risk in doing what they could for others during Covid-19 but often they have not been thanked even by officialdom.  Metal enamelled medals given from the local community to those people may help to show how much we do thank them.  We know from local nurses just how much the people clapping in the street made them push on, but now it is heading for the time that key people need something to keep.  If there is a next pandemic they will remember their value to others.

Design: 2500 medals each in metal that has been enamelled.  Endless numbers of badges might be made that are similar but contain a rainbow and probably for the families of those working while at risk.

Recipients:  Nurses, ambulance staff, medical staff, people seeing many others throughout a day (e.g. supermarket staff, bus drivers, food banks etc), others that were dealing with potentially infectious material (e.g. sewage workers, laboratory workers, nursing home staff etc).  People that could not avoid a major risk (prison officers, nursing home workers etc).   Altogether about 15 groups each represented by a person who would receive a box of medals and badges.

Official giving of the medals:  At the Gregson major hall in Moorgate now probably in early October.  The person giving them out (probably the MP, Cat Smith, and local Councillors).  The recipients can just be asked to give a short story of their experience during the pandemic.

Media, costs and sponsors:  The national TV and news will be invited.  The names of business sponsors will be on a board behind the recipient.  The medals and badges will cost between £2000 and £3000 altogether with no other costs.  We would like to ask local businesses to sponsor some aspect of this; themselves and their staff are the community who needed to use the supermarkets, keep the NHS in mind, and the many other aspects that continued.

Charity sponsorship:  This would be to the Lancaster Green Spaces through Cumberland 16-52-21 a/c  54261749 put ‘medals’ in section asking for the relevance of the payment.  This is a charity number 1046701 and you will get a receipt or an automatic one if paid by card through the web site.