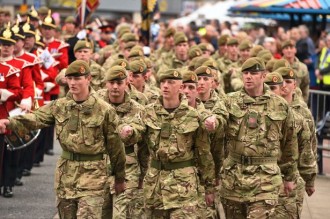 On Monday 17th July, the Duke of Lancaster’s Regiment will be exercising their right as Honorary Freemen to march through the City of Lancaster.

The march will end with the Mayor taking the salute on the steps of the Town Hall and the soldiers being inspected in Dalton Square at around 12.15pm.

To facilitate this, parking will be suspended in Dalton Square from midnight Sunday evening. Access for deliveries will be maintained through Dalton Square to Sulyard Street but Dalton Square will be closed from approximately 12.00 noon until 12.45pm for the inspection.

The route will marshalled by stewards and the police – any obstructions such as A Boards might have to be moved if they obstruct the path of the parade.