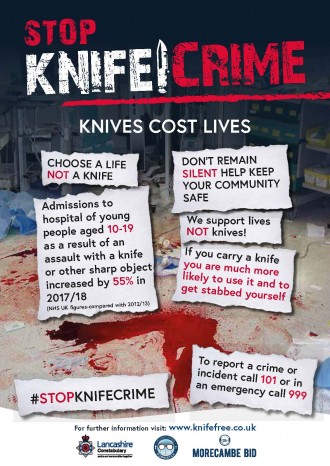 Morecambe Business Improvement District (BID), in conjunction with Morecambe Police and Morecambe Pubwatch have launched an anti-knife awareness campaign in local pubs and other night-time venues to highlight the grief, devastation and loss a single knife attack can cause.

The campaign, based around posters and beermats was launched two weeks ago and carries strong images and messages designed to make people think twice before carrying knives “for protection”. Some of the messages contained are:

KNIVES AND THE LAW It’s illegal and you could go to prison if you:

- Buy or sell a knife to anyone who is under 18
- Commit a crime with the use of a weapon - like a robbery
- Use a knife in a threatening way
- Commit a crime by pretending you have a real knife or gun
- Carry a knife without good reason.
You risk a sentence of up to 4 years

Lindsay Brown, Local Policing Sergeant Lindsay Brown Lancashire Police Partnerships Officer commented: “The Local Policing team at Morecambe are committed to working together with Morecambe BID in tackling violent crime, a key priority across Lancashire.  We want to keep knives off the streets and in doing so protect the public, in particular young people.  We hope this campaign helps to remind the public of the need to work across the community to make our street safer”

John O’Neill, Morecambe BID Manager said: “Carrying a knife is neither brave nor heroic and the argument that it’s “for protection” doesn’t wash as it’s only a recent phenomenon that some irresponsible people have started carrying knives.

“We hope the message gets out into the wider community and also some of those retailers who might not quite understand the legality of selling a weapon to a minor.”

Morecambe BID has an established relationship with Morecambe Police working with them on successful campaigns such as Anti-Social Behaviour in the BID zone and the community radios in the retail community, as well as other initiatives.