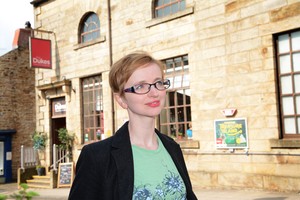 The Dukes new Artistic Director has arrived in Lancaster just eight months after becoming a mum for the first time.

With a new baby and a new job, the past year has been rather busy for Sarah Punshon who moves to the city after spending most of her working life in Yorkshire.

“The great thing about moving to a new city with a small baby is she’s a brilliant conversation starter,” said Sarah. “It’s wonderful to hear the enormous affection so many people here have for The Dukes!”

Sarah has extensive experience as a theatre director but has also directed episodes of Emmerdale, Shameless, EastEnders and Doctors – where she directed Pearl Mackie who plays Doctor Who’s new assistant.
Sarah’s career has also seen her creating unusual live events for Manchester Museum and the Natural History Museum in London.

“It’s hard to put me in a box because my career has been so varied – which makes me a great match for The Dukes,” said Sarah.

“A professional theatre that puts participatory work centrestage; a theatre that’s also an arthouse cinema; a building-based organisation that regularly produces extraordinary site-specific work beyond its walls – The Dukes has this brilliant disregard for boundaries, a refusal to be categorised.”

This August, Sarah will be throwing open the theatre doors for Kickstart Open Space, a chance for Northern artists to take over its spaces for two weeks supported by the in-house team.

“I want to meet local companies and widen the range of people we work with,” she said.

She will also soon welcome a new Associate Producer from Tamasha Theatre who will work at The Dukes for 18 months with the aim of placing artists from diverse backgrounds centrestage.

Brought up in Leicester where she joined the local youth theatre, Sarah studied the history and philosophy of science at Cambridge University.

She is married to writer and performer Daniel Bye and they have a baby daughter, Dot.

“I love making work for families. I’m excited about directing this year’s Christmas show and next year’s park show – becoming part of a grand Lancastrian tradition!”