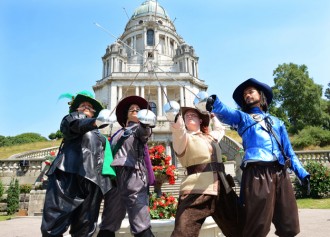 For the first time, the Lancaster theatre’s new Artistic Director, Sarah Punshon, will be taking the reins and has chosen a new adaptation of The Three Musketeers for her Dukes outdoor debut.

"The Dukes park show is an extraordinary tradition: more than 30 years of making memories for generations of families. I'm excited to be able to put my own twist on such a unique format," said Sarah.

The Three Musketeers will be performed from July 3-August 18 in Lancaster’s Williamson Park.

The brand new adaptation of the classic swashbuckling novel has been written by the Olivier Award nominated playwright Hattie Naylor and will feature Lucy Parkinson (aka renowned drag king, LoUis CYfer) as D’Artagnan.

“D’Artagnan is told she can’t fulfil her life’s ambition to become a Musketeer because she’s a girl, so she sets out to prove everyone wrong,” said Sarah. “In 2018, the centenary of women’s emancipation, it feels right to give this classic tale a feminist twist.”

The audience will join D’Artagnan as she teams up with the legendary Three Musketeers in a death-defying quest to save the life of a loving queen.

As they move from one fantastic location to another with the actors, the audience will follow in the footsteps of more than half a million people who The Dukes have been entertaining outdoors since 1987, making their outdoor walkabout theatre season the biggest in the UK.

In 2016, their production of The Hobbit won the UK Theatre Award for Best Show for Children and Young People.

The Three Musketeers runs from July 3-August 18 at 7.15pm (excluding some Sundays and Mondays) and is recommended for all adventurers aged 5+. For more information and to book, visit www.dukes-lancaster.org or ring The Dukes Box Office on 01524 598500.