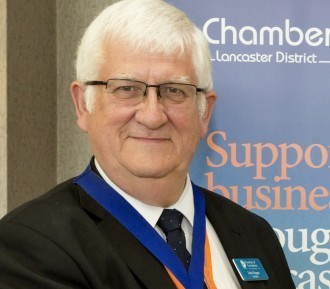 At the AGM held in June Lancaster Civic Society elected a new team to lead them into the 2020s.

Lancaster Civic Society has for over fifty years worked to protect and enhance  the architectural and historical legacy of the district of Lancaster, working with the local community and a wide range of organisations to raise awareness of the importance of the unique architectural heritage of the area.

from its inception in 1967 The Society has maintained at its core a bank of citizens motivated by a respect and love for the architectural quality of the city and its surrounds who are committed to preserving the best and condemning the worst.

Due to the current pandemic it was not possible to hold a ‘physical’ Annual General Meeting but, after consulting with the membership and then through a ‘virtual’ Zoom meeting, Lancaster Civic Society unanimously elected a new Chair, Vice Chair, Hon Secretary and Hon Treasurer for 2020.

John Regan – a past President of the Chamber of Commerce and well-known local business-man – was elected Chair of the Society with Ms Diane Lamb – who has been heavily involved with various committees of the Society over the last few years, including the Executive, as well as a background in Further Education and Project Management – joining him as Deputy Chair.

The mantle of Honorary Secretary was taken up by James Wilkie who is also Chair of the LCS sub group Lancaster Vision whilst David Morgan was elected to the office of Honorary Treasurer and Membership Secretary having worked with John, Diane and James as part of the Engagements Committee of Lancaster Vision.

Incoming Chair John Regan stated “The role of Lancaster Civic Society is to keep the developers, architects, builders and planners true to the unique nature of the City’s heritage landscape. We are not opposed to development and change, but it must be sympathetic to the existing townscape.”

“Too many housing developments appear to be composed of a shuffling of a set of house plans so a development in Carnforth looks remarkably like a development in Garstang or Preston or anywhere else you care to mention. There is little or no imagination.”

“There is too little provision of low-cost and social housing of quality. The development of student housing is too easy an option.”

“We wish to see the provision of quality commercial office space.”

“We welcome the input of the people who live in the District and we wish to partner with appropriate businesses who see the advantage of a heritage city and district provided with modern premises.”

“We wish to see a Local Authority with the courage to protect a unique area but also encourage new and existing businesses.”

He also added that “The members of the Society have had a very significant beneficial influence on the area over the last 53 years and intend to continue to do so through the continued support of dedicated citizens who give freely of both their time and expertise. Accordingly, Lancaster Civic Society welcomes new members.”