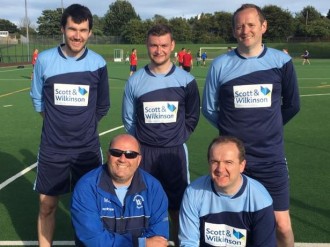 The local branch of MNDA is the chosen charity for the 3rd Annual Lancaster Professionals 5-a-side Tournament, hosted by Lloyds Bank. This popular event, held at the University of Cumbria’s Lancaster site, was extremely well attended with 10 local teams taking part in a closely contested competition.

The entry fee for the event was by way of a donation, and with the proceeds being awarded to the winning team’s chosen charity. £450 was raised on the evening and then doubled through The Lloyds Bank Foundation’s Matched Giving Scheme. As the eventual winners, accountancy firm Scott & Wilkinson had the privilege of presenting their chosen charity, MNDA, with a cheque for the impressive sum of £900.

Tim Preece, Partner at Scott & Wilkinson, who captained his team said, “We were delighted, and a little bit surprised, to win the tournament. The event was great fun and the atmosphere superb, but being able to support MNDA is my personal highlight.”

Anne Harrington from the local branch of MNDA added, “It is only though the generosity of the local community and local businesses that we can support people with Motor Neurone Disease. We are extremely grateful to all the firms and players involved in this event, the sum they have raised is fantastic. Thank you”.

The Motor Neurone Disease Association is the only national charity in England, Wales and Northern Ireland focussed on improving access to care, research and campaigning for people diagnosed with the condition.

The local branch of the charity is run by volunteers, and covers those areas with an LA postcode. This roughly equates to the area between Garstang – Ingleton – Shap. The group meets in Kendal, and works hard to raise funds for this great cause. Money raised is spent locally, helping people with MND by providing care, support and ensuring the early provision of essential equipment (which could otherwise come through the NHS and would be subject to long delays).

As well as helping patients with early access to equipment and services, a key focus of the Association is to raise awareness and understanding of MND.

The Kendal-based group is in constant need of volunteers to help with community fundraising. If you think you could organise an event in your local areas, or spare just a few hours each month, please email Jean Chatterley on d.chatterley123@btinternet.com or Stan and Anne Harrington on stanharrington@googlemail.com