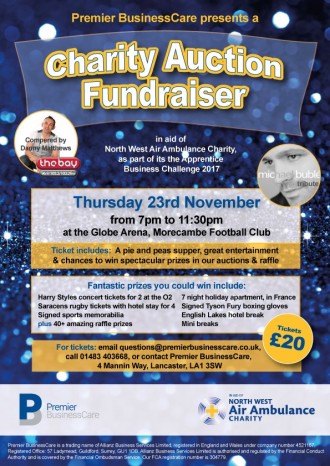 The two teams have already sourced some amazing auction prizes to be sold at their Charity event being held at The Globe Arena on 23rd November. The auction and raffle (which itself has over 40 prizes!) will be compered by none other than The Bay’s Danny Matthews!

Tickets are selling fast but there are spaces still available should you wish to come along for a fun filled night which includes a ‘pie and pea’ supper and complimentary drink. Priced at just £20, all proceeds from the night will go to the North West Air Ambulance.

Some of the auction prizes on offer include:

Tickets are available by calling 01483 403 668 or emailing questions@premierbusinesscare.co.uk