The Dukes Offers Opportunities To Treasure 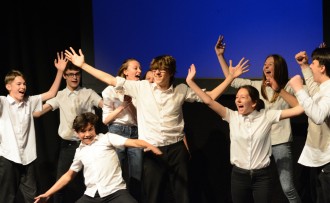 Pupils from four schools set sail on a creative journey to The Dukes theatre recently.

My Next Adventure is… was part of the MAKE Project, a cultural partnership between The Dukes and Lancaster University which aims to develop arts, education and learning in Lancaster and to invest in, enrich and sustain the city’s cultural life.

A team from The Dukes Centre for Creative Learning worked with Ryelands Primary in Lancaster, Morecambe Bay Primary and Heysham High Schools, and Witton Park High School in Blackburn alongside students from Beaumont College in Lancaster and Lancaster University.

Together, they created a brand new show performed on The Dukes main stage, based upon this summer’s Dukes outdoor walkabout production of Treasure Island which runs until August 12.

Each group investigated the themes within the story of Treasure Island and selected one of them to focus on. The young people’s ideas helped to develop the show which included entirely original movement and writing.

Undergraduates from Lancaster University worked with the pupils as part of the new Young Producers programme which The Dukes has launched recently.

The themes explored in the project included self-discovery, materialism, role models, the importance of family and the search for adventure.

The Dukes Outreach and Learning Manager, Vicky Fletcher, said: “We are extremely proud of all the young people involved in the show. They were inspiring and imaginative in the rehearsal room and were very excited to present their show at The Dukes.”