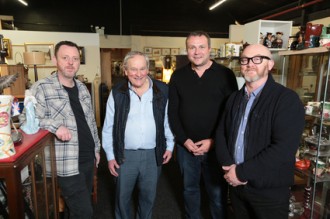 Locals know Lancaster is a real treasure of the North West, and the country’s top TV antique hunters agree! Last week, a team from “Salvage Hunters” spent a whole day filming at Lancaster’s GB Antiques Centre, to see what hidden gems they could dust off and discover.

Salvage Hunters is one of the most popular programmes on the Discovery Network, airing to millions of viewers across over 30 countries worldwide. It follows architectural salvage and antiques expert Drew Pritchard, as he visits interesting and historic places from stately homes to salvage yards, hunting out and buying quirky and unusual objects.

Now in its 12th series, this is the show’s first visit to the flagship attraction at Lancaster Leisure Park, and GB Antiques was a “must-visit” for the team.

The largest antiques and furniture centre in the country had quite a history itself, having already featured several times in programmes such as BBC1’s “Antiques Road Trip”.

Owner Allan Blackburn says; “It was really exciting to welcome Salvage Hunters to Lancashire for the first time. I’m more used to being behind the bygones than in front of the camera, so I’m hoping I scrubbed up OK! They also shot scenes with my son Jimmy, who manages the furniture department at the centre”

After filming, one of the production team Anna Stevenson couldn’t resist a bit of personal shopping, picking up so many treasures for herself that she had to have them couriered back home!

Spending all day rummaging for riches is hungry work, so Drew and his crew were very happy to hand back the heirlooms for a bit and tuck into something much more farm-fresh in the Countrystyle Kitchen onsite. They were then given a whistle stop tour of Lancaster Brewery by manager Chris Duffy.

It’s a closely-guarded secret what the team bought, as the items now go back to be researched and restored, before being put on sale to premium collectors.

Allan said “The team arrived at 8:00am and by lunchtime Drew had picked out a few gems. He told me he was looking for things he wouldn’t normally buy. He likes big quirky antiques that truly show their age. We’re not allowed to disclose what he bought before the show is aired, but I can tell you he was looking for a hidden gem and was thrilled to take away a stand out piece. We’ll be glued to the screen when the programme airs later in the year to see what our polished-up prizes fetch!”

Drew and his team are always on the lookout for historical collections and unique people for filming future series’. If you know anyone, get in touch and we’ll put you in touch with the production team.

To keep up to date with all the excitement across the range of attractions at Lancaster Leisure Park and GB Antiques, see http://www.gbantiquescentre.com/lancaster-leisure-park/